May it please the Court:

On September 29, 2007, (at the former ” Canes” in Mission Beach), and again on April 16, 2010 (at the 4th & B Theatre) the best Attorney Bands that San Diego has to offer met to do battle at the YNLD sponsored Battle of the Bands. At stake was the ultimate title Best Attorney Band in San Diego. Many Bands stepped up to the plate but only one brought home the Title TWICE. That band was: 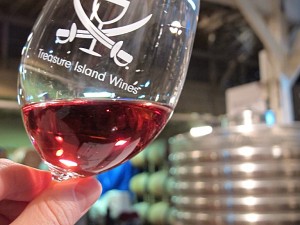 Paul Mirowski and his brother James have been making wine for over a decade and so in 2007 they decided to make it official by opening Treasure Island Wines (TIW). TIW is a sophisticated urban winery and wine and storage facility where the Mirowski Brothers and a select group of Artisan Winemakers produce wine in the heart of San Francisco Bay. TIW’s buccaneer winemakers specialize in crafting small batch wines at our unique facility located in the middle of San Francisco Bay. Centrally located between the Sonoma, Napa, Livermore and Santa Cruz grape growing regions, TIW offers the ideal geographic location for wine production, storage and pre-destination staging. In addition, In addition, TIW offers wine tastings and holds private events within easy striking distance from all cities in the Bay area.

For More information, go to WWW.TIWINES.COM

Some of you might remember “The End,” the song hauntingly sung by Jim Morrison of “The Doors” before his death. In now appears to be near the end of a bitter legal dispute between the three surviving members of The Doors, namely Keyboardist Ray Manzarek, guitarist Robby Krieger and their drummer, John Densmore.

The Los Angeles-based band, which was inducted in 1992 into the Rock and Roll Hall of Fame, had a string of hits in the 1960s including “Light My Fire,” “Break on Through,” “L.A. Woman” and “Riders on the Storm.” The dispute stems from a 1970 agreement signed by the four original band members, including Morrison, that any business deal would require a unanimous vote of The Doors. The agreement was reached after Morrison and three others got into a “violent disagreement” over using “Light my Fire” in a Buick television commercial. Apparently while the three partners had agreed to the commercial, Morrison vehemently disagreed and the commercial was not done. Since Morrison’s death in Paris in 1971, the remaining band members and Morrison’s heirs split earnings from the still-flourishing sale of The Doors’ music and memorabilia. Each partner has veto power over business deals. The appeals court noted that “Morrison had been adamant against doing commercials, and Densmore wanted to honor Morrison’s memory.”

In 2002, Densmore declined an offer from the other two to go on a concert tour as “The Doors.” Reportedly, Densmore did not object to Manzarek and Krieger performing songs put out by The Doors as long as they didn’t call themselves The Doors, use the group’s distinctive logo or any other Morrison-era imagery. Densmore insisted that the other members could not call themselves “The Doors” because it was not The Doors without Jim Morrison.

Densmore and Morrison’s heirs sued Manzarek and Krieger in 2003 after the two began touring the country with Ian Astbury, former lead singer of The Cult, and calling themselves “The Doors of the 21st Century.” Densmore complained that the phrase “of the 21st Century” was often little more than fine print in advertisements and that the new band displayed Morrison’s image dozens of times during concerts. The tour reportedly grossed $8 million and netted $3.2 million, which went to the new band’s company called Doors Touring Inc. and none of which went to Densmore or Morrison’s heirs.

Manzarek and Krieger now call themselves “Riders on the Storm” and continue to perform The Doors’ songs live.