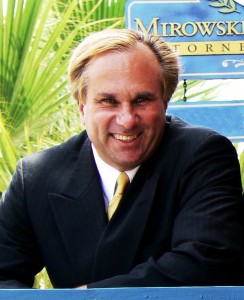 Mirowski & Associates is committed to providing aggressive legal representation to businesses while keeping a focus on common sense and goal-oriented results. We know your bottom line matters! For more than 25 years, Mirowski & Associates have assisted our clients in achieving optimum results by cost effective planning & problem solving. We know our Clients can achieve the optimum results from the attorney-client relationship when the client is well informed of how the law and contract language will affect their decisions. M&A’s goal is to educate our Clients so that they can make good decisions up front and have strong contracts in place before disputes arise. The following pages have information that may help you and your business so feel free to browse around this site and contact us at:

Paul J. Mirowski has been repeatedly recognized by the legal community including:

I, (Paul J. Mirowski) grew up in industrial Michigan where I earned my Bachelor of Science at Michigan State University. Later, seeking to expand my horizons, I moved to San Francisco to attend law school at the University of San Francisco School of Law. After passing the California bar on my first try, in 1983 I formed Mirowski & Associates in San Diego and naturally specialized in representing the Creative Community.

For many years, I served as a Commissioner Pro-Tem (Small Claims Judge) in San Diego Small Claims Courts. I have written and lectured on various topics including many Entertainment and Intellectual Property issues which led to also being an adjunct professor of law at the former Thomas Jefferson Law School, UCSD and Grossmont College where I taught such classes as “Entertainment Law and Practice” and “Computer & Hi-Tech Law.” My career includes a “scam” busting case against local “talent agents” which was widely covered by the San Diego news media and successfully advocating for his client in a New York Federal Appellate case concerning Trade Secrets [See Julie Research Lab. Inc. v. Select Photographic Eng. Inc. et. al.  (1993) 998 F.2D 65]. In addition, I am Chairman and President of San Diego Entertainment & Sports Lawyer’s, Inc. (a non-profit corporation) promoting legal resources for the Entertainment and Sports Community in San Diego and I currently hang my shingle as Mirowski & Associates in La Mesa.

I have a number of outside interests in which I participate. While at MSU, I was introduced to the writings of philosopher and poet Omar Khayyam who is known for such sayings as: “A loaf of bread, a jug of wine, and thou.” When I arrived in California, I was introduced to fine wines and food. One should never leave one’s passions behind and my passions include music, wine and cooking.

MUSIC: Even with his law practice, I continued to be involved in the music scene. In my college years, I played keyboards and guitar in such notable bands as Primal Grunt. After finishing law school and moving to San Diego, I formed the band “Species.” I later released an album of my original works entitled “Of Questionable Origins.” My album can be listened to and purchased at many on-line outlets including Spotify and CDUniverse. I continued to be involved in artistic endeavors including playing keyboards and rhythm guitar in San Diego bands including “The Cubes” (an 80’s cover band), “Shady Grey” (a Classic Rock cover band) and “Rock Justice.” Rock Justice went on to be the Winner of the 2007 “Jam for Justice” Battle of the Bands (held at former Canes in Mission Beach) and again, Winner of the 2010 Battle of the Bands (held at the former 4th & B) by the YNLD section of the San Diego Bar Association (the only two years said event was held).